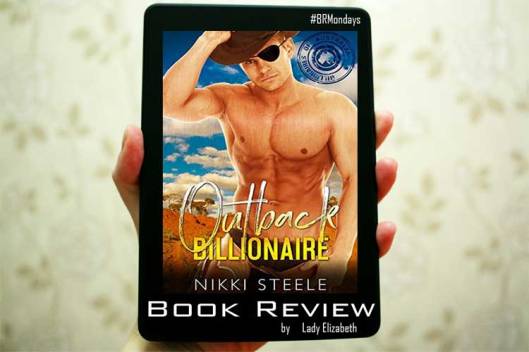 Marlo never expected to find love in Australia—far from it, she hates the place. She’s got a crappy job, her fiancé has just left her, and all she wants now is to buy a ticket home to America.

Then she meets Jack—a handsome, rugged Australian billionaire with a wild streak; as good at handling horses as he is at tumbling in her bed. He owns a station in the middle of Australia, and when she takes up his offer of work, sparks of attraction between the two quickly blossom into romance.

But something is wrong.

Marlo is the one with the broken heart, but it’s Jack who is acting strange—like a storm cloud hangs over his head. It has something to do with the eyepatch just above those kissable lips, but he doesn’t want to talk about it. All Marlo knows is it’s an old childhood tragedy, come back to rear its ugly head.

Jack has healed her broken heart. But that might not be enough in the vast Australian Outback. Because Jack too is broken.

And it might take more than she can give to heal him.

Outback Billionaire is a standalone romance with a happy ending.

But be warned: this book is as hot as the Australian Outback! It contains smoking action between a feisty American woman and a sexy, bad boy Australian Billionaire, including sizzling scenes which are for adults only.

If I’m not mistaken this was the first book of Nikki Steele that I’ve read. Not having into account that I received it as an ARC (advance readers copy) and I’m now posting this review here *cheeky grin*

This story was set in Australia and boy was I able to picture the settings almost perfectly. It was like I was looking at a picture while reading because the description was on point without being over the top.

You know when an author tries to describe the beauty of a storm or rain or a park and over do it, making it that you, the reader, don’t enjoy the description? That was NOT what happened in this book.

Nikki Steele writing was great, in my humble opinion being from South America and haven’t been on that part of the world, ever. I think she did an amazing job depicting Australia in a way that made me want to go check pictures and a video of how on earth they manage cattle with a helicopter (O_O)

Ok, enough with the writing description… The reason why I mentioned so much is because it really impacted me. I don’t usually find books that I like the description of places like I did with this one.

The characters were the other thing that drive me into reading this book slow, taking my time and savoring the minutes/hours of reading.

Jack was a wounded warrior, or at least his soul was that of a warrior in my opinion. He had to be, to be able to rise above the shit that had been his health since he was 8 years old. I understood his reactions, his anger, his frustration, and he acted true to himself all the way to the end.

Marlo was a tough cookie and she deviated from character, in my opinion, a few times, but who is perfect? Nobody.

She was an aspiring actress that wanted to go to Hollywood but on the way, after her fiancé/manager betrayed her, she found out what she really wanted in life. It took some girl balls to stick to what she wanted at the end because it sure as hell wasn’t easy, but hey, life is not easy.

Over all I love the messages on this book. I could see both characters learning life lessons and me along with them.

You want to know about the +18 parts? Just let me tell you this: Jack is smoking hot in the sack. I love him for who he is and he is SEX-Y *smiles*

Amazon best-selling author Nikki Steele first began writing romantic erotica for her husband, Max. She has two cats and a dog – she doesn’t write for them, though they occasionally watch her while she works. She suspects they know more than they let on.

Connect With the Author!

It was easier to be angry than scared, when life was out of control

I like it a lot! Re-read it for sure!